Well that was quite the end to the year.

Having to get back to Weston earlier than planned took its toll on the blog updates (lack of access to my camera didn’t help) but it’s 2018, I’m back in London and everything is back in order – so a delayed Merry Christmas and a Happy New Year to you all.

Right, back to business.

Just the one museum this week as I’ve been settling back in but it was a doozy.

The British Museum is one of the most sensational buildings I have ever been in and is certainly on the re-visit list just from not having a wide enough lens for the Great Court Roof!

I’ll get all the excited Great Court photos out of the way to start with and then talk about a few of the exhibits I made it to.

Later in the day at dusk – this is where the previous photo was taken from, The British Museum, London, 05/01/2018 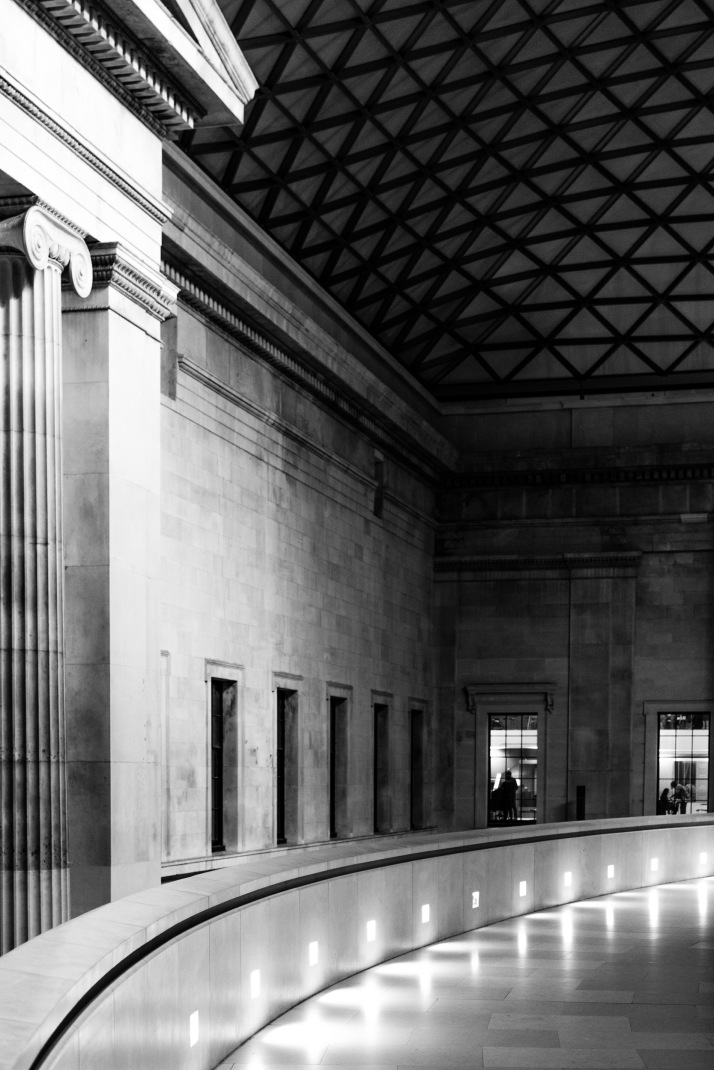 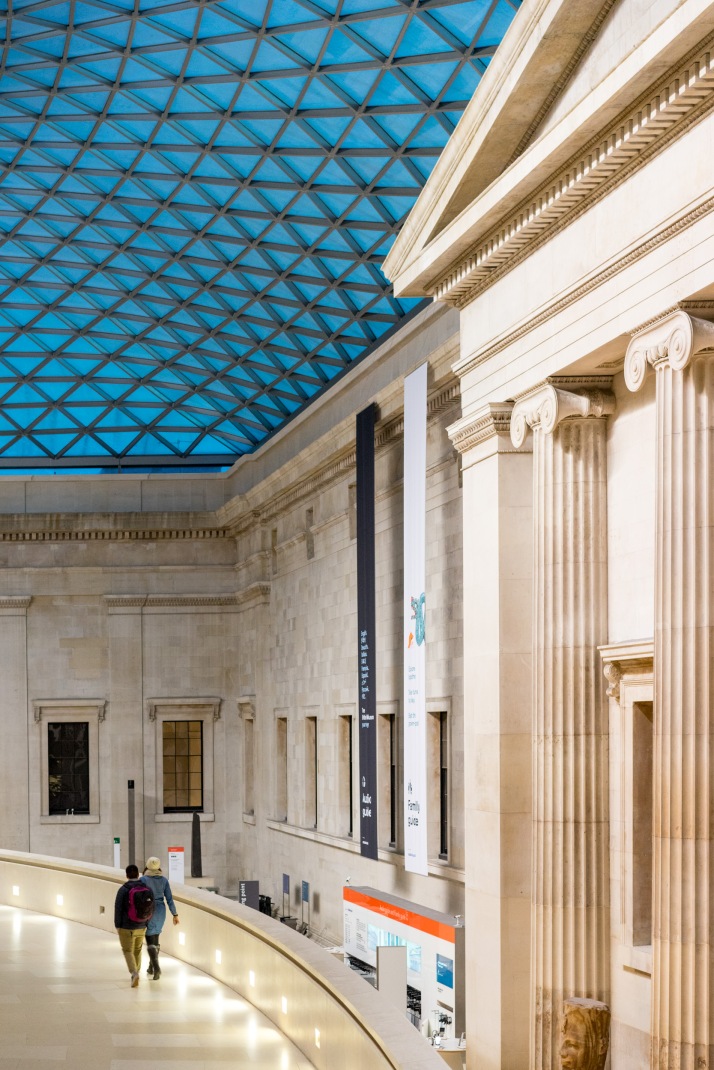 The bar had been set pretty high by the building alone so the exhibits had some work to do but, of course, there are some pretty magnificent objects housed here with the star, for me, being the Rosetta Stone. 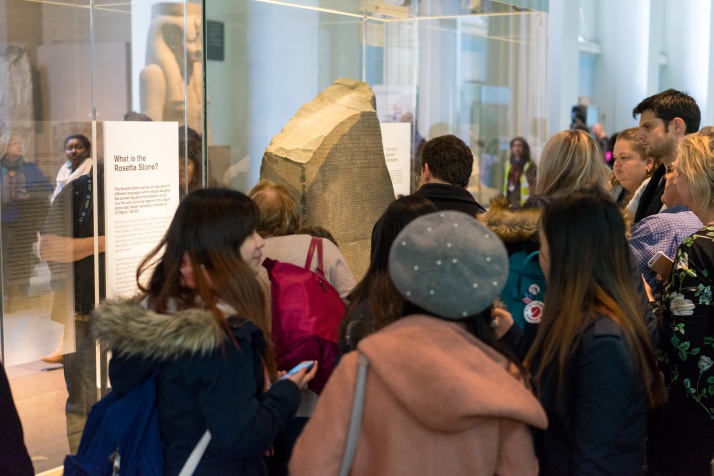 I was quite surprised to find that humble I, with very little difficulty, was able to read the stone – it says “CAPTURED IN EGYPT BY THE BRITISH. 1801”. Apparently it also says ARMY but I didn’t see that bit and on the other side it reads “PRESENTED BY KING GEORGE III” but there were people in the way.

The information sheets describe the Rosetta Stone’s discovery by the British Forces (we discovered the French had it), its return to England (where it has been on display since 1802), and how it was used to translate and read hieroglyphics by Jean-Francois Champollion – certainly worth looking up more information on and of course well worth a visit! 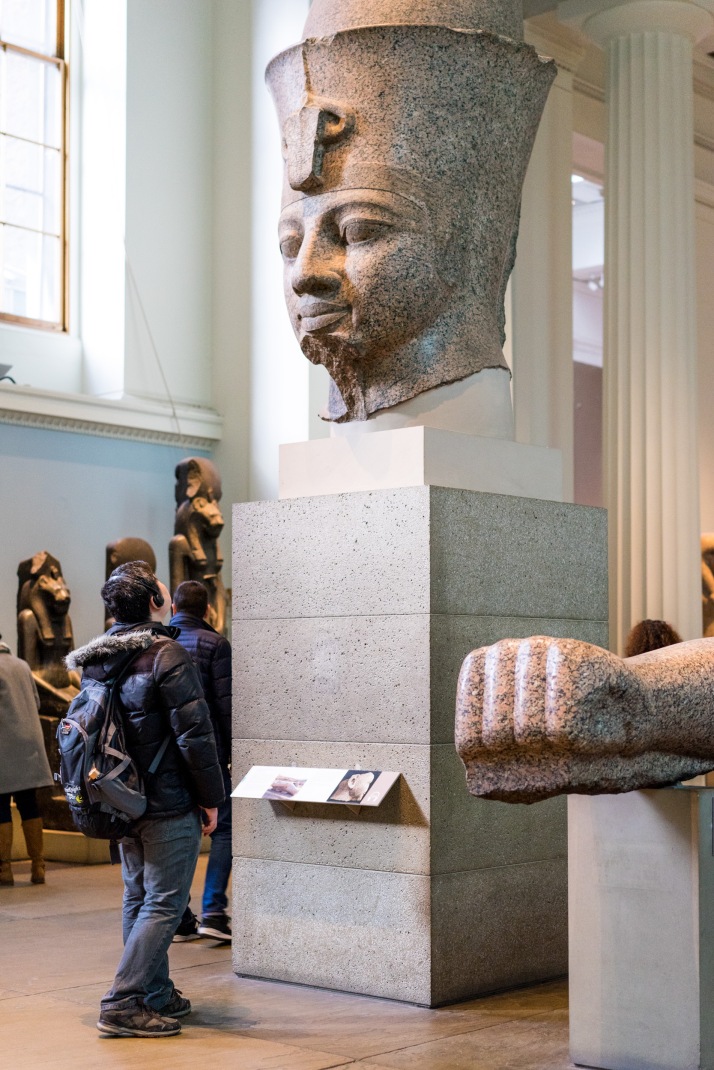 The Rosetta Stone sits among a vast collection of Egyptian, Greek and Roman artifacts. In fact the collections are so vast that my wanderings only took me through a fraction of the exhibits before I’d ended up back at the Rosetta Stone – thankfully though I stumbled upon the Assyrian Lion Hunt reliefs.

These reliefs stood out (hah!) to me from the other objects on display due to how the subjects are portrayed in a much more realistic nature – the British Museum describe them as ‘among the finest achievements of Assyrian Art’. The photos above show 3 portions each about 18 inches long and tell the tale of ‘The Last Great Assyrian King’ Ashurbanipal battling lions. On the right hand side a lion is shown being released from it’s cage (by a boy in his very own lion-proof cage) where it then charges Ashurbanipal who strikes it with an arrow before finishing it off with his sword in the last frame. Now this all happened about 645 BC so rather than worry about cruelty to lions I’m just going to admire the incredible skill and attention to detail of the carver (sculptor/reliefer no idea what the correct term is – probably not reliefer) and boggle at something surviving in such amazing condition for over 2500 years!

Unable to put off lunch any longer I headed across the Great Court for a toasted sarnie and a cup of tea.

Exiting the Great Court to the East took me into the middle of the ‘Enlightenment’ exhibition – I should have entered here from the Grenville Room if I’d wanted to start from the beginning of the exhibition but at least now I know for next time.

The Enlightenment gallery occupies what was the ‘Kings Library‘ and displays both natural and man-made curios that had been amassed by collectors between 1680 and 1820. The objects displayed show how our understanding of the World was developing  during that period and I spent much longer than I’d realised working my way through the gallery!

Lots of information on the objects on display is available on the British Museum website although it isn’t the easiest page to find so here’s a link if you’re interested. 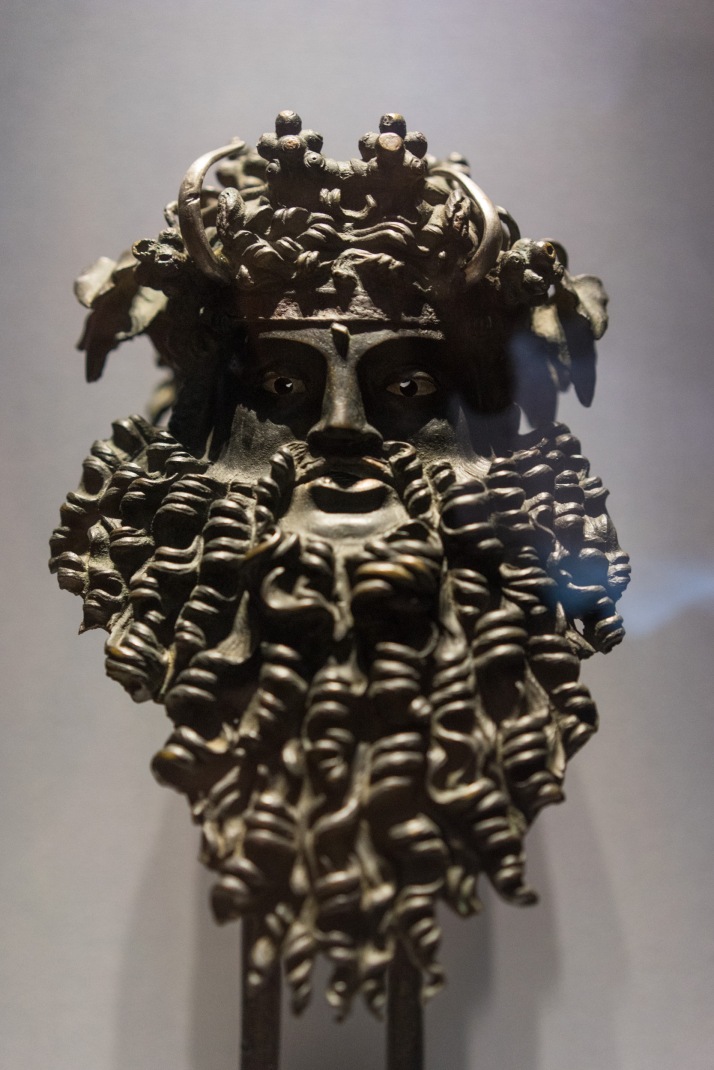 I took very few photos of objects on display as there are already millions of photos of them everywhere but here is one of the Mask of Dionysus, The British Museum, London, 05/01/2018

With that I bid farewell to the British Museum for the day with plans to return to see the remaining exhibits with, of course, a wider lens.

One thought on “Stiff Upper Lip And All That”

Well it's been a few weeks since the last update, Happy New Year all! Rufus has continued to grow and is now a fair old size. He pulls like a bugger now, hence the harness. Rumours of snow on the horizon so fingers crossed for that! Wonder what Rufus will make of it..
Follow We Have It In Writing on WordPress.com